Why do kids get to have all the fun?  Like most products for kids, we have a suggested age range on our DVDs (3-8 years old), but at ArtObet, we think people of all ages should be able to enjoy that wonderful release of rolling up their sleeves and having a good time?  If a kid is around to create with, so much the better!

As part of the ArtObet team, last week I went with Eleanor to a workshop she did at the National Children’s Museum focusing on the life and art of Gustav Klimt.  While the parents waited in the wings, the kids gathered for a story on Klimt and to watch the Klimt segment in the ArtObet film.

After discussing the style and inspiration of Klimt’s beautiful artwork, we got out some black paper, gold sheets, gold paint pens, and pastels and got ready to create our own Klimt-inspired “Tree of Life”. 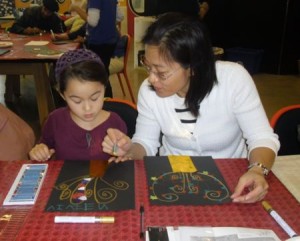 Mother and Daughter at Workshop

Of course, the kids got really into this, but pretty soon they were joined by their moms, dads, and grandparents. And they weren’t just assisting their kids, they wanted to create their own artwork! My favorite was a father who tried to act like he was just going to sit around while his daughter worked on her art, but was fiddling around with the paper and pens nearby — it was clear he was itching to create, but held back to be a “grown up.”  With a few supplies and encouragement, he soon lost his reserve and began joyously creating what ended up being a beautiful piece of art.

Meanwhile, the under three crowd – younger brothers and sisters of kids attending the workshop – were also having a grand ol’ time.  We have so many assumptions on what young children can and can’t do, but these little ones really got into it.  With focus and determination, they created some awesome pieces. As the participants filtered out, we saw even the museum staff was getting busy creating their own masterpieces. What a joy it is to see everyone so inspired to create!

So next time your kids get out an art project, ignore the age ranges and just dive in. You might be pleasantly surprised at how quickly everyone gets into it!

View all posts by: Thyra Nast

3 Responses to “Art is Truly Ageless”
Leave a Reply

By submitting a comment you grant Artobet a perpetual license to reproduce your words and name/web site in attribution. Inappropriate and irrelevant comments will be removed at an admin's discretion. Your email is used for verification purposes only, it will never be shared.